How to virtually transform watching a show in Italian into a learning experience?

Everything is a learning opportunity. If you are watching your favorite Italian show and you hear some Italian expressions that pick your interest or a different way to build a sentence that sounds more natural, write it down on your Anki or notebook. Even if this approach will take you out of the story for a beat, it is the best way to learn and memorize chunks of authentic italian language.

Getting hooked on an Italian TV show and movies is a brilliant idea not only to improve your Italian listening skills and expand your Italian vocabulary like never before, but also to get exposure to the Italian culture, different accents, and slang.

Watching authentic Italian content is by far one of the most effective ways to learn something new to use in your Italian conversations with your Italian teachers and friends.

Think Out Of The Box

In this post, I pulled together a list of the best Italian shows on Netflix. Nevertheless, I would encourage all to look for your favorite TV show (in any language) in Italian. For example, every American show has its Italian dubbed version, find it.

I am a big fan of FRIENDS, and I thought it would be fun and helpful to watch its German dubbed version of it. Do the same with your favorite show in Italian.  The Italian dubbing is usually excellent, and you will be sure to watch something that you enjoy.

The best (and smartest) way to learn Italian is finding ways to spend time, in a fun way, with your target language.

Shall I watch an Italian show with or without subtitles?

Again, if you are not having fun, you’re not learning. If you are not catching most of what you’re listening to, would that be fun? If you are an intermediate or advanced learner, I recommend watching it with Italian subtitles. If you are a beginner learner, use the subtitles in your native language.

Are you a false beginner or intermediate Italian learner? Learn Italian with storytelling 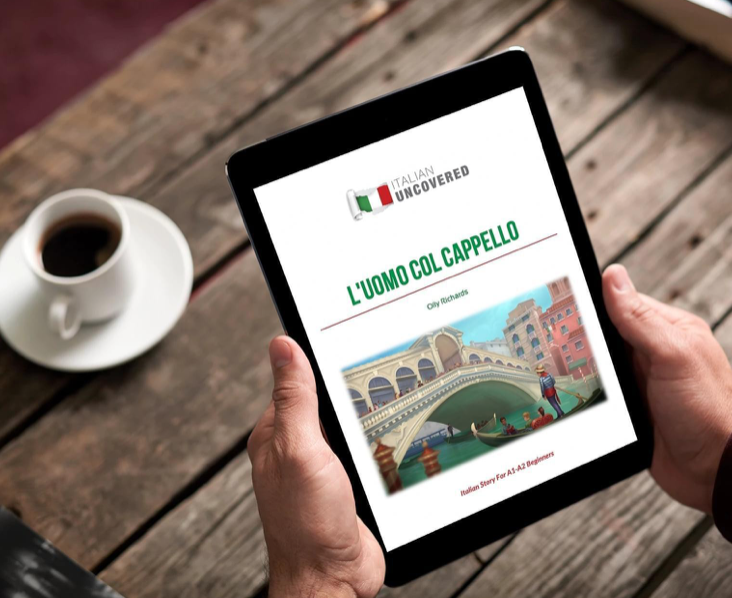 Italian uncovered is a short story-based video course for false beginners (those who have already dubbed Italian for a while) who need a more strategic approach to Italian learning.
The video course comprises 20 chapter stories in simple Italian and includes everything beginners Italian learners need to know to navigate from a beginner to an intermediate level. This is a prooved practical course for those who need to learn at their own pace.
My two cents: make sure to break your Italian study down into short but consistent bites. In short, it’s provided that the most efficient way to study is a 20-30 minute every day or every second, instead of committing to long and sporadic study sessions.

If you want to know more about how to learn effectively, check my article here

Boris is an Italian show released between 2007-2010 on Italian TV. The plot revolves around the making of an Italian series behind the scenes. When a new intern arrives, he finds out how the TV world is very different from what he thought he would be. This Italian series shows how often the race for money and success impacts the quality of what we see on TV. The show was top-rated in Italy, and it’s now available has been recently released on Netflix too.

Extremely addictive and entertaining thriller from Rome with a brilliant Italian cast. I watched the whole two seasons in three days last year (I was in bed due to major flu). The series follows the story of some mafia gangs whose interests are entwined with corrupt politicians and the Vatican clergy. The plot is likely to be inspired by real events. Suburra will spark your attention, especially if you want to know more about the dark side of Italy.

Disclaimer: the main characters of Suburra are dodgy criminals and peculiar characters from the Roman suburbs, that’s why they use the Rome dialect and slang, which might be very challenging to catch for a non-native Italian speaker.

Still, the series is indeed worth watching. Make sure you pull up the Italian or English subtitles.

The Medici: Masters of Florence

The Medici is, in my view, the best Italian TV show for the last few years. It’s an Italian and British production, and so the series has been shot mostly in English. Nevertheless, the Italian dubbed version is excellent and has taken Italy by storm during the whole three seasons.

This is a highly addictive and intriguing historical drama series. It centers on the rise and fall of the Medici family, the most potent Italian family during the Italian Renaissance time. The series will show you a bit of how life used to be at those times, the wars, the political intrigues with the Vatican state, and of course, the strong ties of the Medici Family with the most prominent creators of those times like Michelangelo, Raffaello, Leonardo that used to work in the palace.

Baby is a Netflix Italian teen drama set in the neighborhood of Parioli: one of the most exclusive and trendy areas of contemporary Rome. The series follows the stories of a group of students at an elite high school that gets involved in prostitution. The story has been inspired by real facts the happened in Rome some years ago.

The Black Moon is a 2020 Italian show on Netflix and the first Italian Fantasy TV show on the platform.
It happens in the 17th century and centers on a 17-year-old teen who finds out that the members of her family are witches. On the flip side, her boyfriend’s father is a witch hunter – no wonder who is hunting for.

This is a 2018 Italian TV show created in collaboration between the RAI (Italian public television) and Netflix, who became a success in It’s a crime drama show that follows the story of a veteran detective from Rome who holds plenty of prejudices against the vast immigrant community in Rome. He is teamed up with an Ivory-coast born officer and together, they have to resolve a string of murder cases very much connected with the subculture of immigrants in the capital. The show centers on the very vast and controversial contemporary Italian topic: immigration

The Name of The Rose

It’s the TV adaptation of one of the most relevant masterpieces of Italian literature, The Name of The Rose (Umberto Eco). It follows the stories of a friar and his young apprentices who investigate a string of mysterious death risking the wrath of a powerful inquisitor. The story takes place at an abbey in the Middle Age

ARE YOU A BEGINNER? START ON THE RIGHT FOOT!

Get updates about my immersive experiences, podcast and smart learning projects for beginners

Get updates on my immersive experiences & programs for beginners