Have you been learning Italian for a while? Then, I am sure you have been faced with the quirky usage of the Italian particles ci and ne (also known as particelle pronominali in Italian).

And you’ve been wondering dozens of times how to use ci and how to use ne.

Maybe you have also decided to neglect ci and ne, thinking their use is not essential; but it is. Italians use ci and ne in conversations all the time, simply because they help them be more concise and convey a message faster.

That’s why mastering these two little words will take your Italian very far, in addition to making your Italian sound ten times more natural when you use them. Guaranteed.

Let’s break this topic down into simple bites for you.

What does “ne” mean?

Ne has a number of meanings. Let’s explore them one by one.

NE: of/about it or of/about them

Ne is nothing but a pronoun. Its function is to replace chunks of sentences introduced by di.

As previously mentioned, the best way to master the correct usage of ci and ne is through the context, or in combination with a verb. And so, the easiest way to use ne correctly is to memorize the verbs that use ne as a pronoun.

The most common verbs using the pronoun ne are

As you can see, all these verbs trigger the preposition di.  That’s why we can say that “ne” can replace a sentence introduced by “di” after one of these verbs.

In other words, we can say that…

The particle ne replaces the combination of di + something (complemento di specificazione, in Italian) when you don’t want to repeat something that has already been mentioned.

In a nutshell, the Italian pronoun/particle “ne” means (and replaces)  of it/of them or about it/them.

NE: some of it, some of them

There is a second usage of the particle ne and it occurs when ne indicates quantities and amounts. In this case, ne means some of something previously mentioned.

In this case “ne” indicates some of something else (some of it or some of them).

How ce ne sono is different from ci sono?

You are using ce ne sono in Italian, to refer to something that has already been mentioned. Usually, these sentences are used as a reply to a question starting with Quanti/e?

What’s the position of ne in a sentence?

Ne usually comes before the verb (ne parlo = I speak about it), except when the verb is an imperative (order) or an infinitive.

When ne comes with an infinitive, the final -e of the verb is dropped.

What does ci mean?

The most common verbs using the particle ci are:

We use the particle ci to replace something that has already been mentioned in the conversation.

CI: there, in that place, in there

Ci is also used with the meaning of “there”.

As you can see in the above example, ci is replacing Londra in the sentence.

Italian uses ci to replace the name of  a place that has already been mentioned.

There are a number of verbs in Italian known as “verbi pronominali” that incorporate ne, ci or both. Some examples of pronominal verbs are:

This a rather advanced topic. If you have a good level of Italian you can learn about the pronominal verbs in the next article. If you’re a beginner or intermediate learner, you can skip it for now.

Having a hard time with Italian pronouns? These textbooks might be useful.

Is it time for you to brush up on your intermediate Italian grammar skills? 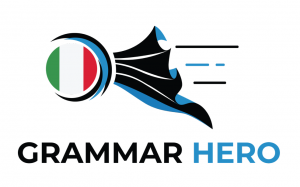 Are you an intermediate Italian learner and want to brush up on your Italian grammar but don’t know where to start? This course by the renowned language expert Olly Richards will help you stop translating in your head and internalize grammar through Controlled Immersion. You will find 15 engaging short stories in Italian that will teach you in small chunks (so that you don’t get bogged down by difficult words or long sentences) and in an easy-to-understand format with plenty of examples. Olly Richards’ courses take a similar approach to what I teach in my private classes: the learning materials you use must be understandable, without long, overbearing sentences, but just the right level of difficulty to push you forward.

Italian Grammar Hero is best suited for students at the B1 to B2 CEFR level, or intermediate to upper intermediate. This is a self-paced course designed for people who want to improve their Italian but can’t commit to regular lessons.